Run for the Hills 5k 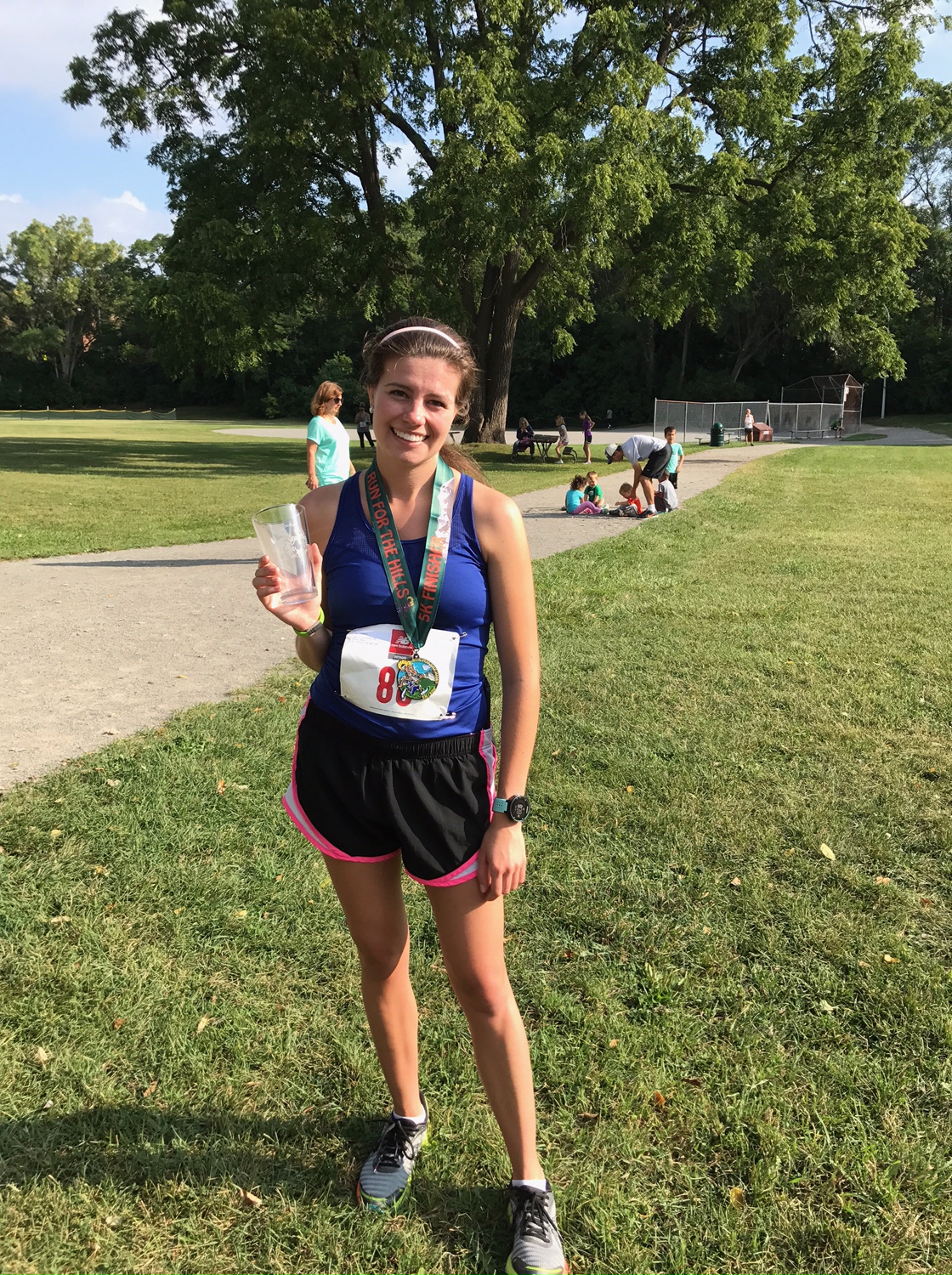 In May, I read an article in Runner’s World magazine on how one editor switched up from racing half-marathons and marathons to obtaining a new PR for the 5k. Similarly, I had become accustomed to settling into a comfortable pace while training for half-marathons. I still did speedwork and tempo runs -but more for the purpose of hitting a target pace. Didn’t always work, either. I’m not good at doing solo speedwork. Or I’d cut it short. Or skip the cooldown. I always had to reevaluate my pace and goal.

I hadn’t raced a 5k in years. I’ve ran a few this year: Chill at the Mills, Paczki Run, Bill Roney Memorial, Stampede Scleroderma, and Sailing Through the Shores. Their finishing times have (mostly) been progressively better since coming out of my winter hibernation. But I always plateau at 25 minutes. I have not ran a 5k in under 25 minutes in 7-ish years. My high school PR was just under 22 minutes. And even then that was my sophomore year and I just couldn’t reach it again.

Since I started running early in the spring and had a decent mileage base going for me, I decided to aim for a 5k in 23:30. Not unrealistic but definitely a challenge. I’ll be honest and say I was a little hesitant telling people. Not for fear of failure and having to share potential disappointment. But I think some people, based on their responses, thought it wasn’t important since in distance running for marathons, you’re not going to be running that fast. Or maybe I just perceived their response wrong and feared what they would think? I choose the Run for the Hills 5k in Farmington Hills, MI. From the time I decided on the goal, it was about 12 weeks out. I knew a race in July might not be enough time for quality training and a race in September would be too busy with other races.

It wasn’t until days before the race when I read a friend’s blog post that I was reminded of a “moonshot” attempt and Nike’s Breaking2. I remember back in May and June people of Twitter and Instagram were asking each other “what’s your breaking two going to be?” People would announce their own ambitious goal, like breaking two hours for a half marathon. Even Kevin Hart said he’s going to run a marathon.

During the Hanson’s speedwork Tuesdays that I tried to attend regularly, I picked 23:30 as a goal time. Sometimes I hit the splits, sometimes too slow, sometimes too fast. I made new running friends and they pushed me when I needed it. I looked forward to each workout whether I was “feeling it” or not.

I derived my own training plan following the one included in the magazine. I substituted the speedwork for the group Hanson’s workouts. I figured even if they aren’t the prescribed 200, 400, 600, 800s, I still planned on longer race distances later in the year.

For cross training, I attended yoga at least once a week, did one of the Runner’s World Iron Strength DVD workouts (which are really hard!), and biked on a stationary bike for 10-20 minutes. Not all of these on the same day, of course.

I did weekly long runs up to 10 miles. These felt more rewarding than usual as I noticed my average pace became faster. Last August my long run averaged 10-10:30 pace. This summer they started around 9:30 pace and the weekend before the race I was down to 8:54. I’m not purposely pushing the pace; I just keep feeling strong and the speedwork must be paying off already. Plus, I’m lucky one of my parents or friends will ride on the bike alongside for company.

I rotated every other week doing an easy run + hillwork with my friend Matt or an easy run + strides/accelerations. I haven’t incorporated accelerations into my training since I was in high school. I also averaged 25 miles a week and still had at least two rest days a week.

My alarm went off at 6am and I stopped it to turn off the sound but when I looked at my phone the screen was black and not lighting up. I used both buttons to reset and the low-power image came onscreen. I didn’t think the battery was that low the night before that it wouldn’t have lasted until the morning. Thankfully, one of my fears didn’t come true and I woke up on time!!!

Matt also signed up for the 10k. I ran the 10k once before in 2014. I remember the houses were pretty, some rolling hills, and a downhill finish. For breakfast I had the second half of my leftover deli sandwich from the night before. I do this frequently before my long runs and some races. I can always digest it and it keeps me full, whereas cereal will leave me still hungry. We arrived to the park with just under an hour before the race started. We checked in, got our t-shirt, and did an easy half mile warmup. The weather was nice- in the mid-60s and not very humid compared to some Michigan mornings.

During pre-race announcements and thank-yous, the director shared that the event this year had raised over $30,000 for the Special Olympics in Oakland County. I am impressed as the event didn’t appear to have more than a few hundred participants. There also was no shortage of post-race treats, even pizza!

The race started- you guessed it- uphill! In the beginning I had to remind myself, “Carmen, you are racing” before I settled into my comfortable and casual pace. There were plenty of turns, though the course was well-marked and filled with volunteers. I don’t think the elevation bothered me much as I was more focused on trying to keep an even effort at this harder pace than taking the hills one at a time.

There was an incredible downhill about a half mile before the finish. The kind of downhill were you had to hold back to not go out of control. I finished knowing I had nothing left in the tank and man was I happy when I looked down at my watch. And thanks to Darren who came with us- we have some nice finishing pictures!

All the finishers received medals!

After the race I recognized another runner who attends the Hanson’s speedwork. We chatted for a bit while we waited for our friends to finish their 10k. I love this local running community I joined!

I got first in my age group and received an etched pint glass. Not only did they give these to the first in each group but also the second and third! How awesome!

We soon left and we got brunch on the way home. I also had to get my Starbucks as a treat. It was a great race and I will definitely want to participate again next year.

Upcoming races include Mackinac Island’s 8 Mile Race, the Brooksieway Half, and a Ragnar Relay. I’m really looking forward to each of these, as these will feel like my first vacation of the summer!