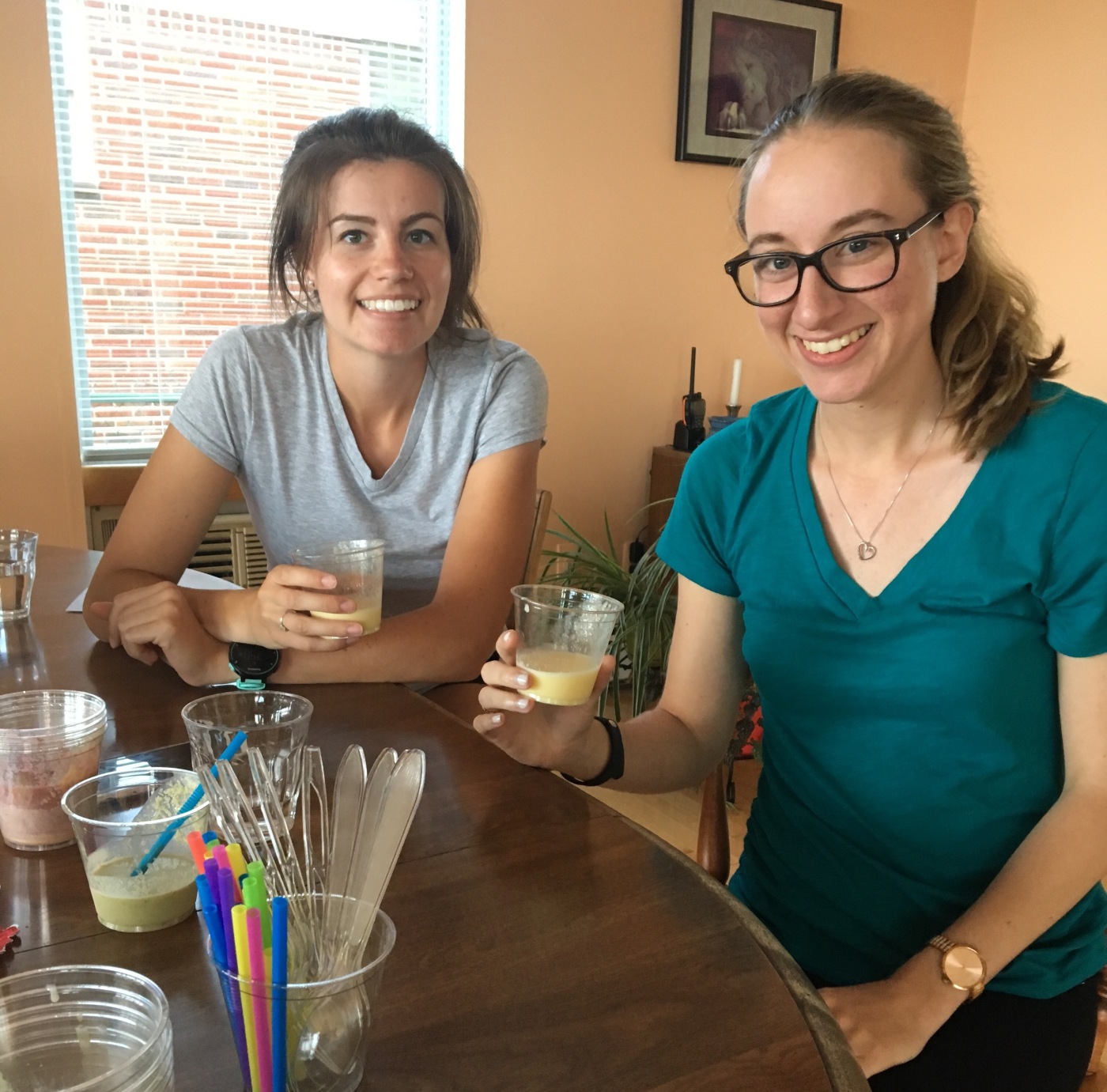 Last weekend I had the genius idea to make a bunch of new smoothies and have some friends come over to taste them and give their opinions. Partly because I am usually picky and likely will not like the smoothie based on the ingredients from the start. And also because I would be less likely to waste an 8 oz smoothie should it be so awful I couldn’t finish it.

I sorted through all three of my “running” cookbooks (the Runner’s World Cookbook, Runner’s World Meals on the Run, and Run Fast Eat Slow) as well as the recent issue of Runner’s World magazine (August 2017), which had the article Smooth Move with smoothie bowl recipes. I picked out six recipes with slightly similar ingredients so that if I had to buy it, I would get good use out of it. The ingredients I did have to run out for were the frozen fruits (cherries, raspberries, pineapple, and mango- I usually have mixed berry bags in the freezer), pistachios, mint, and watermelon, as well as kefir (which I found at Nino’s). Friday afternoon, before I went to dinner, I made all the smoothies. I measured all the ingredients. Even the fruit and milk quantities. Even the tablespoons and teaspoons. I wasn’t going to risk ruining the smoothie with the already-questionable-ingredient choices by screwing up the proportions. After, five friends came over. Yes, five brave, awesome, and trusting friends came over.

I had all the names of the smoothies available at the start but withheld sharing the ingredients in them until after we tasted it. Scott arrived asking if there was kale in anything because he wasn’t having it. Clare mentioned her distaste for carrots. I wasn’t giving in. I also did not taste any of them prior to my guests arriving. And I did confirm there were no allergies amongst us.

The first smoothie we had was Berry Melon from the RW magazine. Personally, I haven’t had a smoothie with watermelon in it before. However, the ginger, mint leaves, and lime juice were too much. Mostly the ginger, as that was the biggest complaint. I didn’t think this would be the least-liked one even though we had started with it first, but it probably was, which didn’t give my friends much hope.

Next was Raspberry-Almond from the RW Cookbook (or as they titled it, Immune-Boosting, Raspberry-Almond Smoothie). This one contained raspberries, kefir, almond butter, honey, and ginger. The probiotic bacteria in kefir, zinc in wheat germ, and vitamin E in almonds are the immune-boosting parts of it. I always recommend taking zinc when you feel a cold coming on; I wish I remember what my organic chemistry professor told us on how it’s magic worked but that was one of my takeaways from the course. The smoothie wasn’t bad. My critics suggested taking the ginger out and adding something to make it sweet. It was also a little too thin for my liking.

Orange Crush (RW magazine) was a hit. I was a little hesitant since when I added carrots to smoothies before it didn’t work out so tasty. In it was orange, banana, carrot, kefir, almond butter, vanilla extract, and maple syrup. My friends needed more orange in it but was already “great!” It called for orange zest, but I had already gotten rid of the peel. I also didn’t have nor add any muesli (rolled oats). Clare was shocked to learn that carrots were involved!

Our fourth smoothie we tried was Green Tea-Green Apple (Run Fast Eat Slow). This one called for one large kale leaf and I only had baby kale so I did some guess work and likely added a little less than the recipe called for. It contained green tea, regular milk (versus almond), dates, peanut butter, and cinnamon. Everyone liked it. It could have been thicker by adding plain yogurt. And Scott was surprised to discover it had kale in it, although I think he was suspicious in the beginning at the slight green hint to the drink.

Then we tried Red Velvet Cheesecake (RW magazine). Topped with chocolate chips, this smoothie was comprised of ricotta cheese, cherries, banana, milk, and cinnamon. I didn’t add the beet even though the last beet smoothie recipe wasn’t all that bad. I also didn’t top with walnuts or mint leaves since that was done for some of the others we tried. To my surprise, my friends remarked it was “very good!” The chocolate chips were a great addition; Jessica loved it! Zak suggested the use of less cinnamon or to maybe add nutmeg. Everyone seemed to enjoy it until I told them there was ricotta cheese in it!

Thankfully, everyone was still going strong when we got to the last one: Island Smoothie (RW Meals on the Run). This one turned out delicious! It was made with milk, kefir, honey, pineapple, mango, and coconut water. I think it would have been better enjoyed if it was thicker; its consistency was closer to a juice. But I realize now the recipe said the coconut water should have been frozen into ice cubes to use in blending and a disclaimer about it being thinner if you didn’t have the ice cubes prepared.

All in all, it was fun evening. I still can’t believe my friends willingly came over to blindly taste them. And I confirmed that if you don’t necessarily know what’s in it, you are more likely to enjoy it because you won’t have any pre-existing, negative feelings about it. This was proven a few times with the smoothies containing kale, carrots, and ricotta cheese ingredients. I still have at least 20-some more recipes from all my cookbooks and magazines that I haven’t tried yet so I may have to have another Smoothiefest later this summer.