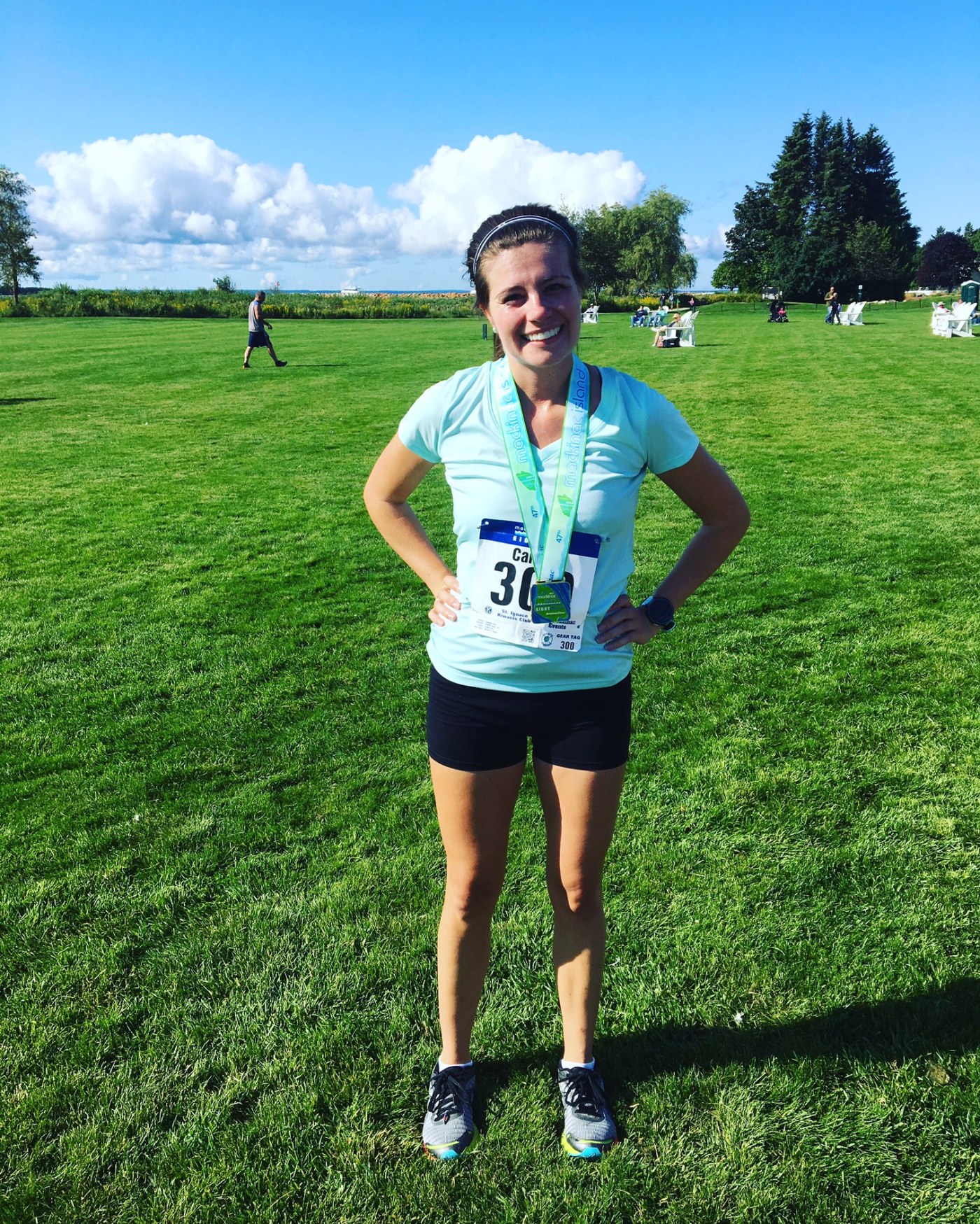 Do you want to run a race with coastline on your left? And forests on your right? While on vacation? Without obnoxious swarms of tourists (because the kids are back in school)? In perfect weather, the start of cooler fall days? I’m describing the Mackinac Island Eight Mile Race that I ran the other weekend (first weekend after Labor Day).

This isn’t a travel blog so I’ll restrain myself from going on and on about the relaxing trip I had and all that I ate and did (so much food!). But! I love Mackinac Island so much; it’s probably the only “vacation spot” I regularly visit (once a year-ish, if that). It’s about a four hour drive and my mom, two aunts, and I arrived on Friday around noon. Last year, my mom, two aunts, sister, and I went for the Lilac Festival (2016). While we were there I figured I might as well run the Lilac Festival 10k. Previously I had never ran a race on Mackinac Island; I’ve ran around the island on family trips while my mom biked alongside. I can recall knowing they had the Eight Mile race, however, I was unaware they actually have three!

I might as well start in the beginning, real quick. At the end of January 2016 I got my wisdom teeth out. And as I said before I hibernate in the winter so I hadn’t been running (an extended recovery after my first marathon in fall 2015). Then by April I was actually ready to get out the door and run. But then I got bronchitis. I didn’t know anyone else who had been sick with an upper respiratory ailment around me so it could have been a combination of running slowly in the cold air and chemical induced from work (gasp!). But gosh darnit- it was actually hard to breathe! Who’d have thought?!

It was May when I actually got out the door again. I only had ran a handful of three milers before the 10k. Our treadmill was MIA. The 10k on the island runs through Mainstreet, up a giant no-joke hill, then cuts through the paths in the middle to the perimeter, and back into the school to finish. That was ran at a 10:27 pace that felt a heck of a lot harder than it should have. I had such a wonderful time and was so awestruck at the beauty that I was determined to return twice more to complete the trio series challenge.

Last summer I trained for a few half marathons so when the Eight Mile race came around I was ready to handle the distance. I remember we had perfect weather at the start of the race but then it rained and stormed in the afternoon. I also returned for the Great Turtle Half Marathon in October on one the island’s last weekends before stores and hotels start to shut down. I didn’t get new shoes soon enough so I likely overdid it with that race. It is the most beautiful half marathon I’ve ran. The leaves are changing. The weather is at the right temperature of cool. And oh, the scenery! I ran through parts of the island that I’ve never seen and probably won’t see again until my next race there. It’s partly trail and during a half marathon that is something I hadn’t experienced before.

But back to my race last weekend. I didn’t plan ahead well in terms of food. Our hotel this time didn’t include a breakfast buffet. And I didn’t pack any good pre-race fuel. I wanted to order Honey Stinger Waffles but ran out of time (I procrastinate, no surprise). Before long runs I’ve been eating the second half of a deli sandwich (Nautical Deli- the best sandwich place on the Eastside!, Jersey Mike’s, etc), so I didn’t have that with me. Weird, I know. So I ate chocolate covered pretzels dipped in JIF peanut butter for breakfast. Since we stayed on the island overnight, I had picked up my bib and shirt the evening before.  My mom and aunt walked down with me to Mission Pointe Resort to check it out. There are a lot of groups; it seems a lot of people turned it into an annual girls’ weekend/race. Or annual family running/walking trip. We took some before-pictures.

It’s impossible to line up 1,200 some participants on the narrow pathway at the start line. At least they get the horses and carriages off the main pathway around the start of the race (9:30am). It’s also hilarious listening to people; about everyone’s “on vacation” if they’re here and I’m willing to bet there’s a good chunk of participants hungover. They do attempt to encourage faster runners to gather in the front. Regardless, it’s a very congested start. I took it slow because it’d be so easy to trip on someone and I also didn’t want to zigzag around people.

The first mile comes fast as you’re exiting the downtown. At that point, due to the race start congestion, some runners appear to slow down as they’ve made a grave running mistake- starting off too fast in the crowd. I didn’t quite have a goal in mind but I settled and tried to keep my pace between 8:20-8:30. There are a few hills on the course but nothing ridiculous that people talk about afterwards. I don’t normally run with my phone but since my mom wasn’t going to meet me at the finish I needed my phone to take a picture at the end! I had a kind couple take my picture. Last year for the half marathon here I had my phone in gear check so someone graciously took a picture of me afterwards and then texted it to me!

We got a very pretty finisher’s medal and a long sleeve shirt.

I like the short sleeve we received last year but these are nice, too.

They also offer free race photos. Unfortunately, for some reason last year during the races I guess I wasn’t photographed! I got in front of the camera this year, though!

I had a great weekend! I hope to do more runcations in the future. What running vacations have you done?