On the first weekend of November, my two friends and I took a three-day weekend and road-tripped to Indianapolis. It must’ve been August when we agreed upon a trip budget. Originally, after hearing raving reviews of the race – flat and fast – this was going to be my fall goal race. But I raced well at the Brooksie Way in September and snagged a PR there, four years in the making. I was already satisfied, to be honest. But still, I kept up some quality workouts to give another good shot at the Monumental Half Marathon.

Neither of us have been there; we took the Friday off work and headed down together. Our first priority was to get my bib at packet pickup at the Convention Center. It wasn’t hard to find but it took us longer than we thought to get parked. And that was the beginning of the parking stress.

I’ll admit I’ve always felt a tad annoyed at the layout of the Detroit Free Press Marathon expo. They make you walk alllll the way to the back, get your bib, and then weave through a maze of booths to exit. Turns out, that’s a really great way to do it after all. The Indy Monumental race expo was so chaotic, crammed, and people walking into people. So indeed, I take back all criticisms of the Freep race expo. They’re doing a great job.

As we were returning to the car to drop off the packet and switch to a warmer jacket, I saw my friend Janet and her husband walking towards us. I knew they were going to be there, along with some other running friends, but to still run into them?! Some good luck! Janet did great during her race, too. 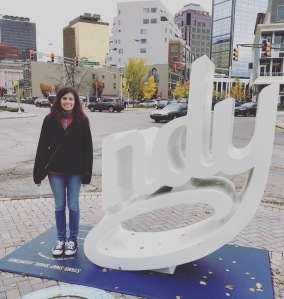 My friends and I used the time before dinner to walk around the monuments and war memorials. I thought it was better to do that on the Friday instead of after the race in case there was just way too many people around or roads still closed. We climbed up the Soldiers and Sailors Monument, 331 steps up. Almost every step had a veteran name plaque dedicated. By the time we reached the top, even with brief landing stops to remove coats, we were sweating! Of course the top is enclosed so there wasn’t a breeze. The view was spectacular; we just couldn’t wait to get back down to fresh air. (You could have taken the elevator almost all the way up for a dollar- next time.) During the race people would stop in their tracks to take a picture as the course wove around the monument circle. We also visited the Indiana War Memorial. If we weren’t nearing closing time or we weren’t starving, we could have stayed longer to read more. 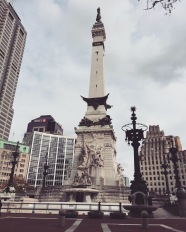 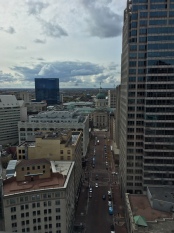 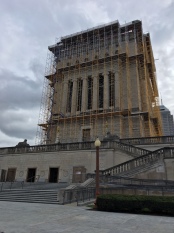 By then it was early for dinner but we had sorta skipped lunch while driving. We ate at Bru Burger. I read ahead of time that it was voted one of the top restaurants of the year in Indy. And it was appropriately awarded, I might add. We cleaned our plates, the fries were good, and the ketchup tasted homemade. So who cares that we were eating dinner at 5pm because when we were leaving every table was full and people were outside waiting to get in.

We picked up macaroons for dessert back at the hotel and back we went. Of course it started to rain when the Weather app said it wasn’t going to. (If you’ve read any of my blog posts for this past year, apparently I bring the rain.) We stayed at a hotel about 12 minutes south of downtown. It turned out to be a very convenient location and an affordable option. I’ll share this in case anyone reading cares about being budget-friendly and reasonable: between the hotel room for two nights, accumulative parking expense over the entire weekend, and fuel costs for a 700 mile round-trip, split three ways, it was $120 each and I believe we were all happy with how well it worked out.

I don’t think any of us minded about getting back to our hotel room before 8pm. I was so nervous about finding parking in the morning that I didn’t sleep as well as I normally do (even as far as out of town races go). I got out of bed by 6am and dressed. My idea was to Uber in and leave the hotel by 6:45am to get downtown by 7am, a good hour to relax before the start of the race. Since I wasn’t planning on being around the hotel for very long in the morning I didn’t eat any of the hotel breakfast. So what did I eat for breakfast before a half marathon race??? Milano cookies. Eight of them. When it was 7am and the Uber drive was still stuck downtown probably from the road closures, I gave up and we headed to the car to drive ourselves. But not until the windows defrosted. And when we turned at the Lucas Oil Stadium and pulled into a lot for… only $10 (!) guess what! THERE WAS SO MUCH PARKING AVAILABLE. Thank you, Amanda and Clare for dealing with me- you two were right.

At 7:20am we were following the crowd to the start line, a half mile-ish walk from the car, maybe? And I ate a packet of Honey Stinger chews (I wasn’t completely under-prepared). I had my RoadID on, phone in my SPIbelt, written my friends’ phone numbers on the back of my bib in case my phone’s battery died from the cold, and we found our meeting spot for after the race. We were ready!

We all hung around the corral for a little bit and then I encouraged my friends to take off and get brunch while I run. “Please, stay warm and eat something good; I won’t be upset.” They went on their way and I got into my corral. (Turns out my friends got seated before rest of the spectators rushed in!)

Milano cookies for fuel, probably not the best (so much for trying to eat like a runner should, better luck next year), stress for no reason about parking, and my third and final mistake? I started too far back in my corral. Wave B had paces from 1:45-2:00 for the half-marathon runners. I was standing between the 1:55 and 2:00 pacers and it was already too packed to push forward and I didn’t want to be that person. When the race did start, the sun was rising and I very gradually, over the first 3-4 miles, started to gently and kindly make my way to the lower end of runners going at 8:00 pace. I don’t care for people who jump around runners, even hopping onto sidewalks to get by, and come close to tripping people because they “have” to get ahead and I certainly was not going to be that person. And if it meant a slower time, so be it. My high school coach always said a race isn’t won or lost in the first mile. We can apply the same principle to the first few miles of the half marathon. I took it gently and when space opened up, I went through. If I were to carelessly squeeze through people I could have easily been elbowed in the face.

One thing I noticed between this the Monumental race and the Detroit Free Press races is that the streets of Indianapolis are a little narrower. And this is an opinion I formed learning that about 18,000 people participated in the race weekend (compared to Detroit’s 25,000 from this year). And I keep comparing it to Detroit because it’s the only other big city race I’ve ran (ummm Chicago or NYC would be pretty cool…). Either the streets are narrower or they should split the corrals by pace up even more.

Eventually, I reached the runners going the pace somewhat-like what I was aiming for and that was good. I did ‘let up’ anyways and ran a pace that was a little more comfortable and natural since the “playing catchup” was tiring, even though it was much slower than it felt like- must’ve been the all the mini surges. It didn’t feel like I was giving up because I came here to enjoy the experience after a more relaxed training plan. The half marathoners split from the marathoners around mile seven, I think, and I ate my last packet of Honey Stinger chews then.

I ran in leggings, a tank top, t-shirt, and a long sleeve shirt. Also, I wore gloves and a headband. It was 32F at the start. When I finished the race I was warmed up enough that my sleeves were pushed up, I had shed my gloves miles ago, and I could’ve taken my headband off but I love it too much to risk dropping it mid-race.

Maybe it was because the race was the weekend following Halloween but there were quite a few spectators dressed in costume or in onsies! All the more entertaining… One of my favorite spectator signs I saw was something along the lines of, “so this is you working off all of your kid’s candy you inspected!” I really loved the last few miles of the race. They’re hard for many and at the Monumental race as you’re heading back into downtown you really felt like you were on the homestretch. There were a lot more spectators lining the course and whether they were yelling encouragement or not, they were out there in the cold waiting for somebody. As expected, it was even more packed near the finish! I heard my name being called from the left but I couldn’t spot Amanda and Clare. I got a medal, hat, cookie, and chocolate milk, there may have been more goodies that I missed. I easily found my friends at our pre-determined meeting spot. They got finish line pictures of me! 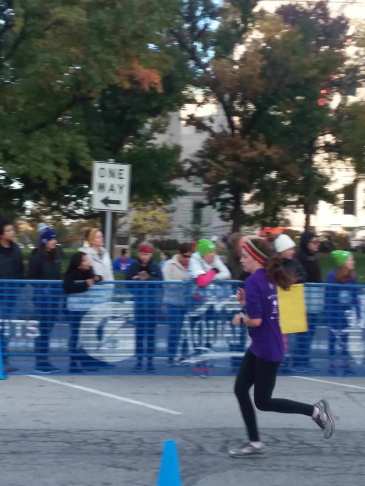 I grabbed a coffee from a shop on the way to the car and had the easiest parking lot exit post-race ever. The rest of our Saturday included a trip to the Indianapolis Zoo and a delicious taco dinner a town nearby, Broad Ripple (thanks to the recommendation from a Twitter friend). On Sunday morning we stopped at an art sculpture garden on the way out of town. 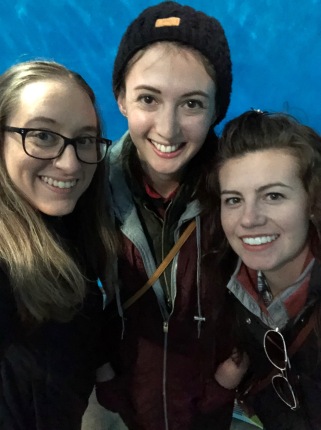 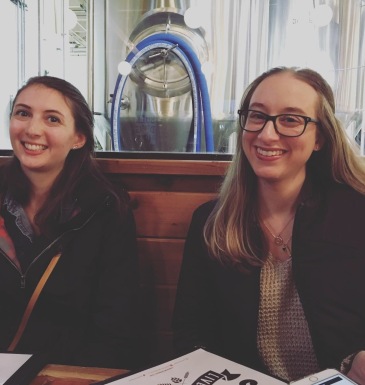 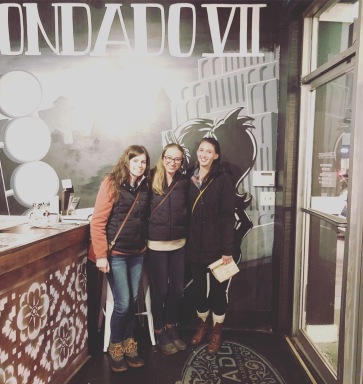 I really enjoyed our Indy trip and there was plenty for us to do and more to discover if it had been warmer outside.

I finished in 1:50:08, 8:25 pace. I couldn’t have asked for a better time and I’m not disappointed. If I didn’t PR at the Brooksie Way, this would have been a PR even. Several of my tempo runs this fall averaged out to 8:25 so that’s right on track. A better breakfast could have helped fuel me for when I worked harder to make up for starting too far back in my corral, both mistakes I made. Even still I think I placed 1361 overall, 431 female, and 81st in my age group. Lots of quick runners!

The course was true and flat. The only inclines were brief 10 foot hikes over bridges. Nothing to worry about! The race shirt was a t-shirt, which I prefer to longsleeve shirts, and the medal is quite heavy (and designed to be a part of a four-year race streak). 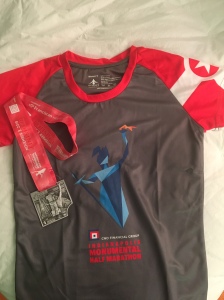 I definitely want to come back one year for the early summer race that takes you on a lap around the Indy 500 track. Now that would be a neat experience.

One thought on “Monumental Half Marathon 2018”