This is a well-overdue post on my most recent half-marathon race I ran in September 2018. This is one my favorite half marathon courses; I ran it last year, too, and several times before then. Just in case this is as far as you want to read, I’ll tell you now I ended up running a new personal best.

I didn’t wake up with a gung-ho attitude of PR-ing. My time goal for the Indy Monumental half marathon in November is 1:45-47. My PR was 1:50:11 (from this course in 2014). So to shoot for 1:45 and to take five minutes off in one swoop was a little ambitious; I know that. Now, after the Brooksie Way I am chipping it off a little bit at a time. My tempo training goal pace has been 8:23, of which I had only done three tempo runs since I officially started training for Indy in the first full week of August (the Brooksie Way was at the end of the 7th week of training).

That Sunday morning I woke up at the same time that I would have for work. Traffic was light and I should have arrived at 6:45 am for my 8 am race. But I must have gotten off at a different exit than I usually do because the traffic was so backed up to get onto the University’s campus that I spent 20 minutes to go probably one mile in my car. I wasn’t parked until 7:20 am and I still needed to get my bib! I spent no extra time lingering in my car.

My car had the temperature at 42F! Thankfully, there were no long lines for bib pickup. Unfortunately, they were out of women’s smalls (and some other sizes it seems – I think this was their first year with gender-specific shirts). I wrote my name/email/size down on a list because they were going to order more, which is great! I pinned my bib on, walked around outside to see if I recognized anybody, then headed back inside the bib pickup tent. The lady who checked me in came over to me and gave me a shirt in my size and crossed my name off the list – she must have found one! How nice of her to recognize me! Volunteers rock!

I didn’t do any warmups (though I should have because it was so cold). I lightly stretched my hip flexors’, dropped my bag in gear check, and went into the corral. I easily found my friend Donna (the same amazing runner I trained with my marathon earlier this year), as she was a pacer for 1:55 and all the pacers were dressed to the theme of “Where’s Waldo”.

In my opinion, and I’m certain many will agree with me, “banking” time in a race just rarely seems to work. I’ve attempted this before with pacers who did it (this one, Detroit Free Press half last year, and more). Because this is a hilly and challenging course, yeah, it seems like a good idea at first. But it’s a terrible idea! You train for a certain pace, then run 10 seconds/mile faster in the first half, and somehow you hope to maintain your goal pace for the second half but you’re probably going to slow down from the hills, and be more exhausted because you ran too fast earlier.

In the beginning I was close to the 1:50 pacers but my watch gave me splits faster than 8:20s. They were really banking time. Running 8:20s for me was ideal based on tempo runs but I had no intention of banking time with the pacers. I was running by feel and not worried if I was in front or behind the 1:50 pacers. Below are my watch splits from this year on the left and last year (2017) on the right. I believed last year my fitness level was on par to break my 1:50 PR but the race was oddly hot and humid. 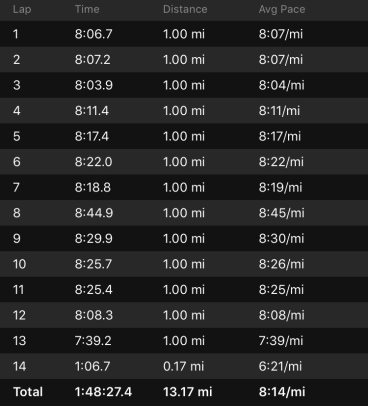 Even though the temp was in the 40s, it took two miles for my toes to warmup. I also ran in a tank top and shorts. And I am so glad I didn’t have another layer. With the sunshine it felt quite warm once we were off running.

The fourth mile is when you leave the roadway for the trail. Everyone is pushed closer together. There’s some jostling from runners slowing down and runners who MUST get around you and can’t wait for space to open up. Don’t get me wrong, it’s truly a lovely course and there’s nothing wrong it, even when the trail forces runners closer together! It’s in races when you notice some lack of etiquette among other runners. Or maybe its me being bothered when people start breathing down your neck and nipping at your heels… Anyone else?

I ran the last three miles pretty much side by side with a guy and when we had two miles left I told him I’m on track for a PR so I was really going to push the pace and hoped he’d keep up with me. And he did! And he said he PR’d, too!

The only thing else to add about my race was that I didn’t refuel during it. I didn’t bring any chews with me but I did intake water somewhere in the 7th mile (right before the big hill climb starts), 10, and 11. Around mile 10 I was wishing I had chews or Gatorade, though, as I was beginning to feel famished. 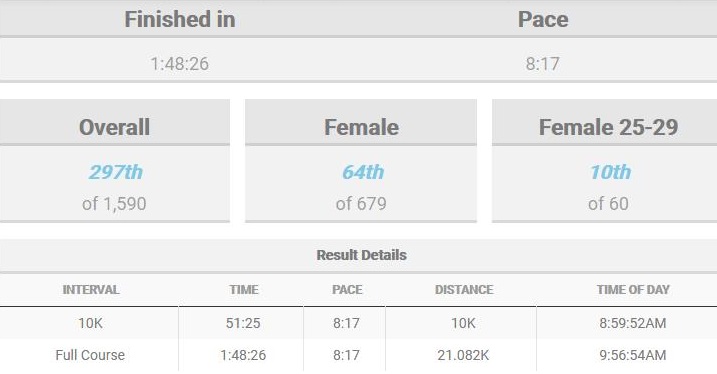 Before I can end this blog post I have to give thanks to the many volunteers – everyone from passing out water, the many cheer stations and musical talent lining the course, to sheriffs and officers standing in intersections blocking traffic. This is by far the course that I feel safest on.

It was a great day! I had finally PR’d in the half marathon distance that I’ve been working on since 2014 (at least eight half marathons later) and I’m very proud of my splits for being consistent and not slowing down much from elevation.

Something I can work on? I always walk when I get my water so that I do not choke on it! You can compare moving time vs the split time to see how many seconds I was walking to take in water (miles 8, 10, and 11).

Have you ever had any success with banking time in a race? What’s some running etiquette in a race you would like to emphasize?

8 thoughts on “Brooksie Way Half Marathon 2018”