A Guide to Getting into Yoga 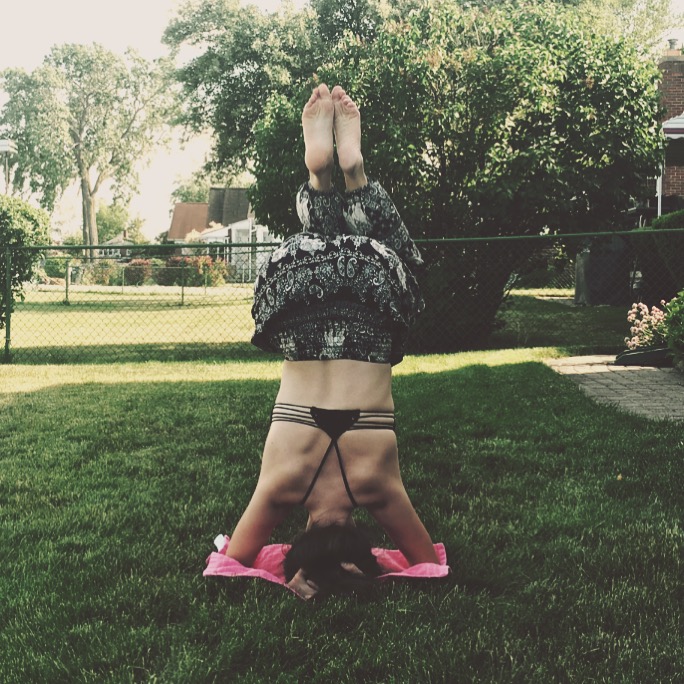 Two and a half years of at-least-once-a-week yoga, and no, I cannot touch my toes (sitting or standing), damn hamstrings. In a blog post last year, Yoga & Me, I wrote about how and why I got into yoga- cross-training for my first marathon. But now I want to share how YOU can get into yoga. This is more like a guideline for what you can expect, as a runner or non-runner; it’s my realist, most down-to-earth tips to get you through your first yoga practice.

My very best secret to finding your yoga studio- your yoga studio, not a yoga studio- shop around! I went to four different yoga studios before settling at the studio I’m at now. Many studios offer some kind of “try before you buy” deal. Like a two week unlimited for $20. Or a free first class. If they don’t, check Groupon, but read the fine print. Take advantage of these deals. I wouldn’t want to pay full price for a “drop in” class.

Then, go to as many classes that you can. Yeah, the class will be hard- just like your first and second and third run was hard- but more on that later. You want to make the most of your discounted trial period, right? Look at their class schedules and variety of classes offered. Try their hot vinyasa (take it up a notch), slow flow (literally, slow it down), yin (deep and long stretching), gentle (lay-on-the-floor and de-stress), or even the yoga that incorporates light weights to really make it burn. Try all that interests you; you’ll get a preview of the instructors and what they’re like, too.

Pay attention to how many participants are in the class. Do you think a Sunday morning class would have few students? One studio I visited had myself and four other people in the class, one of which was an instructor there. The studio I’m at now is packed on a Sunday morning. Maybe it is an unpopular class time but maybe it also says something about the studio…

Something else to consider is the location. If you plan on attending classes on your way home from work, is it convenient? Then again, my studio is 12-ish minutes away, even though there’s another studio that’s three minutes away.

And the last step in finding your studio, does the instructor sound like he/she is making it up as they go? Or do they have a plan? This may be difficult to tell as a new student. But all the classes have some sort of structure to them, you’ll see. 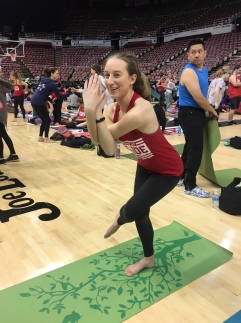 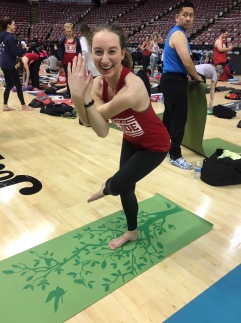 Once you’ve decided on your yoga studio, inquire about the new student special. I would bet that the studio has some sort of X months unlimited for Y amount, but only available for purchase immediately after the trial ends. (That’s the fine print.) But you said to shop around first?! Yes, but again, I would bet that the studio will still honor that new student special if you’re returning to them even a few weeks or a month later. I mean, what business would turn down a new costumer?

And what’s that saying, doing something however many times makes it a habit? Well, 30 days unlimited for $30 is a GREAT deal, so yeah, you should do it, make yourself go as much as you can, you’ll start to enjoy it, and then yoga will become a habit. 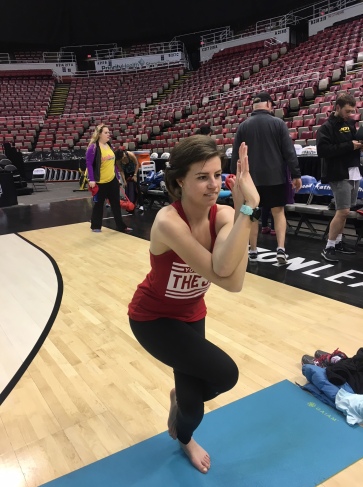 Heading to your first class:

What you need to bring:

Why do yoga people wear that tight fitting clothing? When it clings to you, it’s flexible. And you don’t want to be restricted. I frequently wear running shorts to classes in the summer and sometimes I have to readjust my shorts in a lunge-like pose. 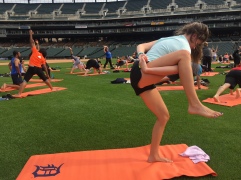 Similarly to running, I don’t care for a lot of loose clothes flopping around. (I never wear sweat pants while running, only leggings.) I also usually end up tucking my shirt into my shorts or leggings, not because I don’t want my belly showing but because I don’t like my shirt falling in my face in downward dog.

Most great instructors will tell you pose modifications to make it easier or harder. This is good. Tell them you’re new and they’ll help you out. If they don’t realize that there are new people in the class, they may not add all the extra instructions to get to each pose and you’ll be looking around at what other people are doing. Tell them you’re new, even if it’s your second or third class ever.

Just like coaches who correct your form or give you advice to be a better runner, yoga instructors who care will come and correct your alignment. But, realize that they don’t want to come over to correct every pose you do wrong to make you feel embarrassed, hopeless, and discouraged. Even as you continue to practice they will correct you. That’s not to say you’ve been doing it wrong all this time- and I’m speaking from experience here- I thought I had triangle pose down, but two years later I get corrected again, to make my pose even better.

Andddd just like coaches, yoga instructors can be certified. I don’t know all of their requirements but I do know that it’s very involved, expensive, probably six months long, and they do learn anatomy and physiology. So depending on what your career is, they’ve had a more recent review of your bones and muscles than you have. They will tell you, “if you’ve had shoulder or neck issues, don’t do this, do this instead.”

In general, class start at rest, such as laying down or sitting. Maybe even standing still. Then, some gradual warmup- just like an easy mile and a half run before a workout! The class moves into nice challenging sequences or flows that will give you a deep stretch you’ll hold for several minutes or several poses one after the other that buildup on each other (like running 400 m, then 400, 600 m, then 400, 600, 800 m). To wrap up the class, they’ll slow it down with some kind of cool down (like running, too! Who knew?!). Sometimes it’ll be stretching you’re used to doing after a run. And lastly, classes generally end in savasana, aka corpse pose, in which you literally lay on the floor and rest. I’ve come close to falling asleep at this part, several times. I’ve heard people snore!

During the class, you can stop and rest at any time. Sip water. Wipe your face. Do child’s pose to take a break.

The first couple weeks are tough on the shoulders but you can skip downward dog and do table pose instead or skip it altogether. Just like running, if you do a pose that causes pain, not discomfort, don’t do it. No judgement here. There’s also a surprising amount of yoga pushups.

Many studios have free props to use to help your practice. There are bolsters, blankets, straps, and blocks. Grab a block for your practice- it doesn’t necessarily make it easier but it will help. I use a block for many poses when I can’t reach the floor or need more balance support. I also don’t like to sit on my knees and I can sit on the block instead. Bolsters are more commonly used in yin or gentle yoga classes. Blankets are handy for kneeling lunge-like poses so that you can cushion your knees.

It’s good to point out that at the end of practice, the instructor will thank you for attending and they do this little bow to you and you bow back. It’s not religious in any way nor does it acknowledge any sort of yogi god. It’s more like an acknowledgement of each other’s peace.

Tell them you’re a runner:

Runner’s World posted this nice article on why your yoga instructor should know you’re a runner. Have I told my instructors, flat out, that I’m a runner? Not quite. But fear not! Here’s some good ways to throw it out there over time:

I’ve read somewhere in a magazine or across the internet that a harder hot vinyasa class shouldn’t be taken on days that are your running rest/recovery days, and to instead choose a gentler yoga practice instead. I’m going to disagree with this and here’s why:

Some other last tidbits to eliminate all other excuses:

At my yoga studio, I’d say every 1 in 5 students in a class is a guy. It’s not weird! Some are young. Some are old. Get over it!

The only reason someone might look at you is if they’re trying to figure out the next pose, too. Trust me, no one is judging you. Just like you (hopefully) don’t stare and judge other runners for their speed or gait, no one in that yoga studio will think anything negative of you.

Do not be self-conscious at not being “good” at it. For every two seconds of crow pose I am able to hold, I fall 100x.

If you need further convincing of the benefits to yoga, here’s my personal fashionista’s take on how yoga has helped her.

Lastly, don’t believe all the awesome, twisty, complicated, gravity-defying pictures on social media. Most people don’t post all the times they’ve fallen. Which happens. And just like running, get right back up and try again!

3 thoughts on “A Guide to Getting into Yoga”