Back in February when my dear friend Caity, who I met in high school, asked me if I wanted to do an overnight relay from Muskegon to Traverse City, I was hesitant. After a few days of deliberation, “Yes, I’m in! how could I turn down this opportunity!! So other than the deer, wild animals, and darkness, I’ll be OK.” I was now part of the team!

We named ourselves Beauties and the Beasts due to the three woman on the team of twelve and the lack of more original creativity (the remake was released in March of this year). Parts of the team met in June and August to plan. We had some amazing stats guys who took care of organizing the finances for the trip and predicting pace and start/finish times. My sister helped design a team logo for us to make our own personalized t-shirts. Someone else had magnets made to tag other vans. The Thursday before the race there were still four members on the team I hadn’t met in person yet but I wasn’t worried because the four other new team members I met at the meeting were nice.

Thursday evening we all arrived at our hotel in Muskegon and then took off right away to Montague, where the 6th leg and last leg of van 1 would end to van 2’s start. This was where the check-in and safety briefing was so as not to have to arrive even earlier to the start of the race. We ate dinner after at a nice restaurant in a marina off of White Lake, Crosswinds on the Lake. By the time we finished and made it back to the hotel it was after 9 pm. We tried to get to sleep as soon as we could but our alarms came fast Friday morning at 4:30 am. In fact, I woke up before the alarm as we could hear yelling from the lobby below our window as groups were gathering for the first wave. Our wave started at 6:00 am!

And not to delve into too many details, I’ll just summarize my three legs I experienced. My first leg was 3.7 miles. It ran through the town of Whitehall, on a bike path for some it, past the restaurant we ate at the night before, and finished at the park where we had to check in at previously. We had a heatwave the past weekend and week on the east side of the state so the temps here in the 60s in mid-morning felt great. My predicted pace was 9:00 minute miles when we submitted them months before. I wasn’t expecting my training to pay off so much- I ran it at about 8:25 pace.

The finish of my first leg was at a van exchange. We took a group picture while our seventh team member was off running. 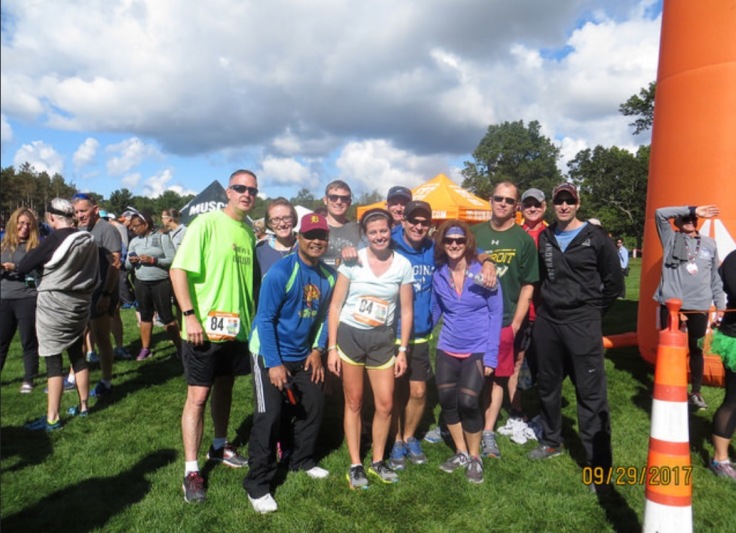 While van 2 took turns running, we did some scenic driving past the Silver Lake Sand Dunes, and drove to the next exchange where we would meet them after their last runner ran. Conveniently, Val-Du-Lakes Bar was located at this exchange so we were able to eat a lunch not consisting of Kind bars and apples. After we ate we tried to take a short nap in the van. I did switch legs with my high school coach who was on the team; he was sick the last week and still not feeling well. Had I been in that position, I would be trying to not let on how awful I felt; runners are stubborn, aren’t they? He was glad I could take his 7.9 miles and I was glad he took my 3.8 miles because then I didn’t have to run in the dark!

My second leg went from Hart to Pentwater. I really should have stopped to take a few pictures…

Like my first leg, runners were spaced out for the most part with at least 100 hundred yards or more between them. There were some empty stretches but eventually I caught up to some people. There were a couple of rolling hills but nothing compared to the Brooksie Way the weekend before. My team met me around mile 5 and I snagged a few sips of water. If my run is 8 miles I can make it without refueling along the way.

When I ran Mackinac Island’s Eight Mile race in early September, I ran it at 8:23 pace. This is interesting because I wasn’t trying to really “race it” but run it like a tempo run. This 8 miles was at 8:28 pace and I wasn’t racing at at all- I had a completely different mentality running from the previous race! It’s new for me to experience this pace as being comfortable. The leg finished just inside Mears State Park. 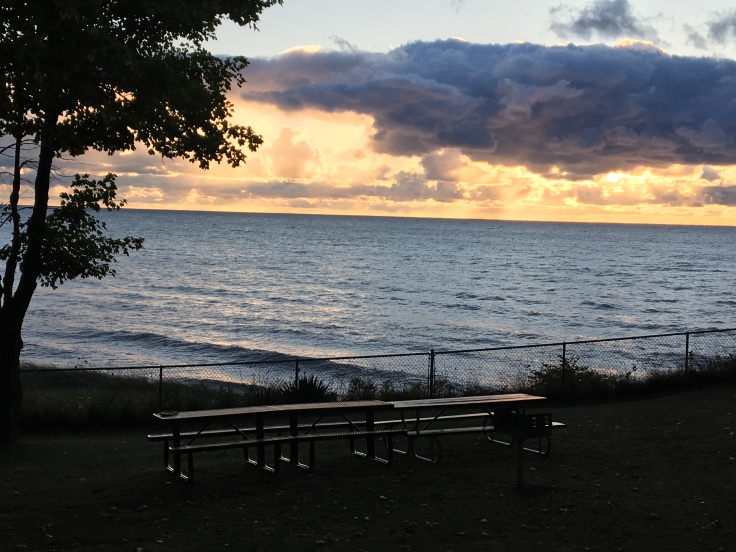 The sun was just starting to set, too. The temperature was dropping. It was 59 degrees and windy when I started my second leg.

After all of our legs finished, we were at a high school in Ludington at 8:30 pm-ish. While van 1 was running, van 2 arrived early and tried to get a few hours of sleep in the school’s gym. They also had the chance to use the showers. Van 1 remained smelly until the next day!

Instead of sleeping at the gym, we drove to the next exchange that the vans would switch again. It was probably a good 30 minute drive, at least, to the Manistee County Fairgrounds. We ate Little Ceaser’s Hot-and-Ready Pizza for dinner, which was both good and bad at the same time, being it almost 10 pm. The sleeping quarters here was a pole barn with what I’m assuming was a concrete floor. And by now it was cold enough to see your breath outside- in the low-40s. I got a chance to brush my teeth and we tried to sleep in the van between 10:45 pm and 2:15 am. Around midnight we had to turn the van on to warm up. We estimated that our runner could come into the exchange some time around 3:30 am.  We were out of the van probably around 3 am. It was freezing outside!

All the night runners rocked it! I think I can handle a night leg now. Safety requirements meant they had headlamps, taillights, and reflective vests. We also added glow sticks and extra light bands around the arm. After seeing how this gear really helps to be seen in the dark, I don’t know how (or why) a runner can go out without it! I don’t do any running in the dark or dusk but I will be getting a reflective vest to keep in my car for emergencies. By now, all the later waves seemed to have caught up and the runners were in groups on the shoulder of the road. The running in single-file order kind of reminded me of the Jawas in Spaceballs (dink-dink).

I was doing well with little sleep until 6 am-ish when I felt myself crashing. Once it got more light out, I felt better. My last leg started about 9 am. It was 37 degrees out. I’m glad I opted for a longsleeve shirt and shorts because I did heat up. My portion was 5.2 miles from Benzonia to Honor. The first 3/4 miles were straight down hill (my teammate ran uphill just before handing off to me :D). This time, I  guessed my pace would be right at 9 minutes a mile. It certainly averaged out to 8:56 pace but I ran up a hefty hill (past Crystal Lake, the Cherry Hut, and Platte Lake, if you’re familiar with the area) and finished at the Cherry Bowl Drive-In. Van 1 was done!

We ate breakfast at Big Boy, washed the van from the paint, and tried to check into our hotel early. Eventually, when we could we took speedy showers and walked to the waterfront park where the finish and post-race party was.

It was around 3 pm as our last runner and team captain finished, we joined him to run across the finish line together. Pictures, team medals, beer, and corn-hole! It was sunny and warmed up to a nice and fun afternoon getting to know team even better outside of close proximity.

Ragnar Relay had really nice jackets to buy but I ended up buying a running hat. I’m excited to use this one instead of my regular cap I use for running; this one is actually thin and lighter fabric made for athletic use… 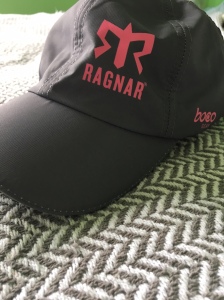 Some other tidbits about Ragnar Relay, Michigan: