Sunday was my 11th year participating in the Roseville’s Big Bird races. Except for my first year in 2007, I’ve done the 10k every year. The first year I ran the 4k distance. They also have a timed one mile; there’s enough time for people to race the mile and then jump in the 4k or 10k race. I don’t race very many 10k’s a year and some years it is only Big Bird. But my mom and I keep going back year after year. She runs the 4k.

Reasons we love it and keep going back:

Once again, we were worried about a snow/rain mix falling in the morning. We lucked out, thankfully, and southeast Michigan finally got the colder weather we’ve been waiting on. My run on Friday afternoon had feel like temps at 18F!

Start time temp was 37F! This year the wind was at a minimal. I ran with my new Ragnar Relay hat on just in case the rain did come. (It ended up only being a light sprinkle.) I also had my leggings on and a t-shirt and long sleeve shirt under my 1/4 zip jacket. I probably could have done without one of the layers since near the end I was pushing my sleeves up.

We still arrived over an hour before the races started because we like to chat with people and take our time. My mom and I recognized one of my old friend’s mom and they ended up running the 4k together.

I’ve never caught up to my mom before during the race but this year I did, right before the 4k runners turn in and the 10k runners go up over the pedestrian bridge.

I had encouraged my friend Janet to participate in the race, too, and I could always see her bright jacket ahead to focus on.

I think it was last year that they changed the course route to avoid Frazho Road. For years it had seemed to always be ridiculously windy and when the route was on that road for a mile stretch it was miserable. Now the course weaves through two parks and I like it. The course is all residential and there’s volunteers and park employees at every street crossing and turn.

Even though it’s only a pedestrian bridge, when you cross back over after hitting mile five, it is tough! Looking at my splits, you can tell where the bridge was (just after mile 2 and 5 splits) although I tried not to let it beat me. The last few miles my breathing felt labored and sure thing my heart rate averaged out higher than the last couple of races. I knew I was working hard!

I finished in 48:26.5! Can you believe it?! I really wasn’t expecting anything below 51 minutes despite another sub 24 at the 5k race the week before. I also placed 2nd in my age group and 48th overall. 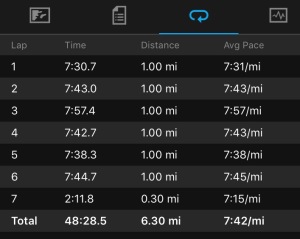 My long time friend David has been running a little with me AND been doing the Iron Strength workouts. He finished 3rd in his age group, won a Hanson’s running gift card in the raffle, and got this great finish line photo (photo credit: my mom).

Janet also received an age group award (first!) so we had to take another picture together.

This year my mom won a turkey in the raffle. Then after awards they kept pulling bib numbers for the last unclaimed frozen turkey and I won, too!! I’ll be honest, I screamed when he called my number. And when I went up to get it, he said, “you scared me.” Whoops! I couldn’t help it! I was excited!

Personally, I love how the Big Bird race has the same design each year for the long sleeve shirt, though they switch the color up. Once I get a  couple more, I’m going to turn them into a t-shirt blanket through Project Repat. Since I get a lot of technical material long sleeve shirts, I do appreciate that theirs are cotton.

So it turned out to be a pretty good Sunday. You’ll see me there next year- come join me!

Do you have any races that have become an annual tradition?