Believe it or not, I had a blog post written in early January about a summary of my wonderful 2018 running year. I just never got around to typing it – until now. Instead I got other projects done, like my hexagon afghan that I started in early 2017. It took me two years to get it done! And some other stuff on my long to-do list; getting this blog post up wasn’t a priority.

So here it is:

Not gonna lie – it was a pretty amazing year of running for me. It was also a long time coming. See this note? These were the goals I wrote in January 2016, following my first marathon in the fall of 2015.

My 5k time that year was from a 3-mile time trial (not even with the extra 0.1!) and settled at 26:08. My 10k time was 54:06 (from the Big Bird Race, of course). And my half marathon time was 1:55:48. I finished 2016 with a little less than 500 miles. Aiming for 800 miles was a bit much. I thought it was realistic but it wasn’t. I attributed my fewer miles during each undergraduate year as a result from taking 16-18 credit hours a semester. I didn’t really think how much running 800 miles in a year really was. I’ll have you know, I can recall thinking while it certainly was ambitious, but it was achievable. But it wasn’t because I wasn’t as strong of a runner yet. 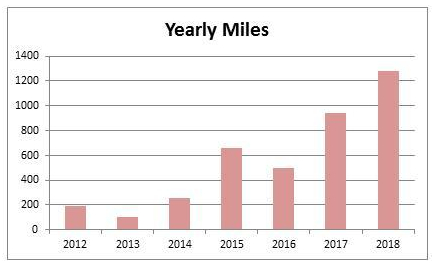 That paper was my first written running goals. It took a while to achieve. In 2017 I got a few of them, over a year later from when I wrote them! I had resolved to run one race a month. This included my first time running races in January, February, and December months. I also got over my shyness and started going to speedwork sessions put on by Hanson’s Running. Yes, in 2016, I did interval workouts but doing them on my own was not enough.

And what about those time goals? In 2017 I had my first 5k time under 25 minutes in seven years! And my goal for that race was based off the paces I picked at those speedwork sessions. My 10k time was 48:26.5. I kinda sorta got it. My half marathon goal was still quite out of reach (the best that year was barely under 1:54). Although I should be ready to race no matter the conditions I felt robbed as I was expecting cooler fall temps and instead got 90 degrees F and high humidity or high winds. I truly felt I was capable of a 1:48 half marathon. And guess what? I still didn’t get my 2016 written goal.

Now, if you’re still with me, how did my 2018 wrap up? I PR’d in the 5k, half, and marathon. (By the time my annual fall Big Bird 10k rolled around, I was mentally and physically done.) I went to yoga 59 times! (I really slacked in November and December – only went once each month).

Even though I don’t have any mileage goals for 2019, I do think it’s important to have written running goals. My non-running resolutions include:

It’s the end of February and I’ve been keeping up with these well. It’s a promising start.

And my running goals, written out:

I *think* I’ll get the sub 23 5k in the first half of the year. It’s a thought. Low 22 would be kinda cool. I need to be realistic about that half marathon goal. And I would really like to do a mile race or two. I’m going to wait until after my first 5k of the year before choosing a goal. I did a mile time trial in January in 7:37. Sub 7 minutes would be a good starting goal. I hope to do more cross-training throughout the year, something other than yoga. I’m thinking of trying a cardio boxing class. I loved the cardio kickboxing classes I did in undergrad.

And that’s it. That’s my long awaited wrap up of 2018. Just need to pick out some spring races!

Do you set any mileage goals for the year? What are your racing goals?